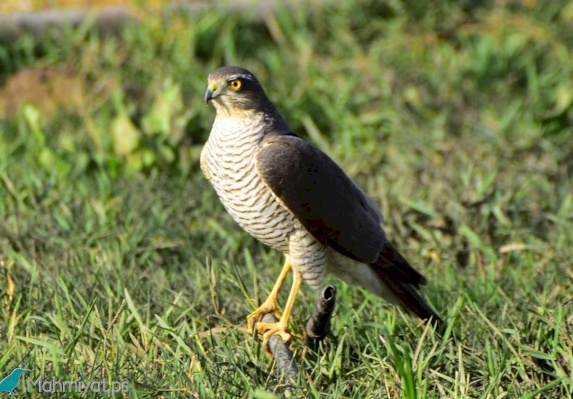 The Eurasian Sparrow hawk belongs to the Accipitridae family in the Accipitriforme order. It is 29-41 cm in length, 117-345 grams in weight a with a wing span of 58-80. The females are bigger than the males. The Sparrow hawk is a small raptor with a long tail and short wings, well adapted to hunting in the thick of forests and woods. The silhouette in flight is characteristic with wide rounded wings, blunt tips and a rounded head like a "flying mushroom". The tail is long and narrow, used in maneuvering between the trees. The male is noticeably smaller and more colorful. The upper parts are bluish-gray and the lower parts are white with rusty red narrow horizontal bars. The cheeks are reddish and the eyes are yellow. The female is 25% larger and heavier with a strong stable flight. The upper parts are of a charcoal gray color, and the lower parts are white with thin black horizontal bars. There is a white brow stripe above the yellow eyes. The Sparrowhawk flies low above and between trees and bushes, surprising its prey at close range. Due to the alarm calls of songbirds such as the Bulbul or the Great Tit they are often discovered (about 10% success rate). The flight at all heights is a combination of soaring and gliding interspersed with swift wing beats. The size differs between the different genders and enables diversity in the prey and therefore a more varied diet. The females can hunt birds that weigh 500 g and more, whereas the males hunt small birds such as Tits, Sparrows and Finches. The Sparrow hawk breeds in all of Europe, central Asia and east to Japan. The female lays a clutch of 4-5 blue eggs. The incubation period is 33 days and the nestlings fledge 26 days after hatching. The breeding success is dependent on the wellbeing of the female who is dependent on the male for her nutrition. 34% of the fledglings survive the first year, and in the second year the mortality of the remaining fledglings is 30%. The world population is estimated at approximately 1.5 million (2012) and is apparently stable. The population was declining due to pesticides containing organophosphates in the second half of the twentieth century. By the 1980's, after the use of these pesticides ceased, the population recovered.