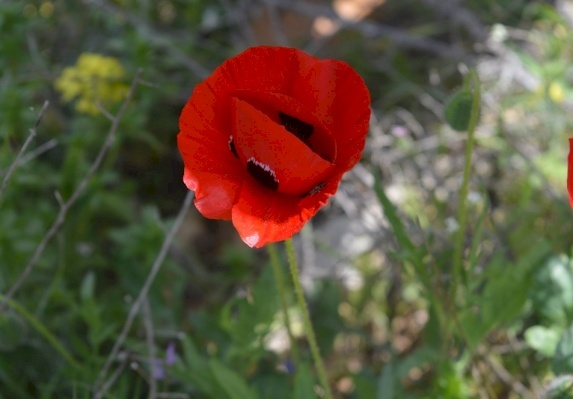 It is annual plant, native to Palestine and belongs to the Papaveraceae family. Leaf arrangement is alternate (one leaf per node), and rosette and leaf type: dissected, dissected once, Leaf margins are dentate or serrate. It has hairy stems contain a latex or milky sap. The petal colors are red with black. The flowers are hermaphrodite only, it blossoms in the spring from March to June. The flower buds are nodding or bent downwards, turning upwards as they are opening. Fruits are Capsules erect; seeds many and they are homogeneous seeds-fruits.

Ecology: This plant grows in disturbed soil. Its seeds may lie dormant for years until the soil is disturbed. Then they bloom in great numbers under cool growing conditions. It is glycophyte in terms of salt salinity, non-succulent plant without any spiny parts. The plant follows the Mediterranean phytological zone.

Similar plants: Papaver umbonatum, is often confused and misidentified as Papaver rhoeas (corn poppy, common in Europe) even though it is classified as the rest of the subspecies, since they are very similar in form and appearance.

Uses and medical actions: Generally, Poppies have a long history. They were already grown as ornamental plants since 5,000 BC in Mesopotamia. They were found in Egyptian tombs. In Greek mythology, the poppy was associated with Demeter, goddess of fertility and agriculture. People believed they would get a bountiful crop if poppies grew in their field. They are also sold as cut flowers in flower arrangements. They deserve a prominent place in any garden, border, or in meadow plantings. They are probably one of the most popular wildflowers. In the course of history, poppies have always been attributed important medicinal properties. It is used as mild sedative. The stems contain a latex or milky sap and this may cause skin irritation.

Cool facts: Poppy seeds are harmless and edible, but all other parts of poppy family members contain toxins.