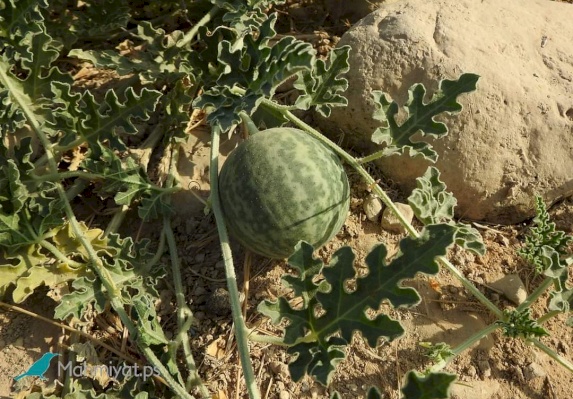 Citrullus colocynthis, also known as bitter cucumber and  colocynth. It is a desert plant, distributed in different parts of the world from Asia to Europe, it belongs to Cucurbitaceae and commonly known as Bitter Gourd, Bitter-apple, Colocynth, Vine-of-Sodom. This plant is a type of perennial annual vine which has tendrils that can extend more than 3 meters. The leaves look like the watermelon ones that they are palmate and angular with three to seven divided lobes. The flowers are yellow and solitary in the axes of leaves and are borne by yellow-greenish peduncles. They are monoecious, so the male (stamens) and the female reproductive parts (pistils and ovary) are borne in different flowers on the same plant. Flowering Period:          May, June, July, August. The fruit is smooth and spheric in shape. The seeds are grey and 5 mm long by 3 mm wide. They are edible but similarly bitter, nutty-flavored, and rich in fat and protein. They are eaten whole or used as an oilseed.

Itis a desert viny plant that grows in sandy, arid soils. It is native to the Mediterranean Basin and Asia, and is distributed among the west coast of northern Africa, eastward through the Sahara, Egypt until India, and reaches also the north coast of the Mediterranean and the Caspian Seas.

It is used traditionally in determined doses as a purgative and analgesic and used to treat diabetes, since it may be able to induce insulin secretion from the pancreas after supplementation, while reducing blood glucose and improving lipid levels. In traditional medicine, such as a laxative, diuretic, or for insect bites. In traditional Arab veterinary medicine, colocynth sap was used to treat skin eruptions in camels. Low doses of its seeds and fruit can reduce blood glucose levels. Higher doses are associated with side-effects like colonic inflammation and rectal bleeding.